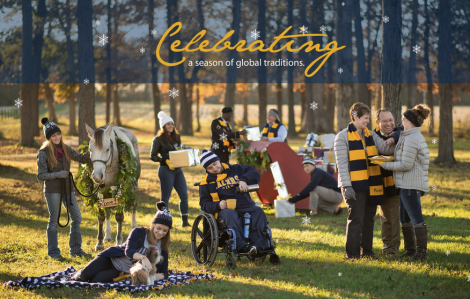 In preparation for our 2015 end-of-year fundraising campaign, Murray State University decided to implement a crowdfunding trial utilizing the institution’s existing social media platforms. The integrated campaign was built from the university’s integrated marketing communications holiday promotion, which was designed to support the university’s yearlong 60th Anniversary of Desegregation celebration.

The Challenge Was On

As part of this communications campaign, the university decided to attempt its first-ever crowdfunding campaign to support its end-of-year annual fund efforts. The initial goal was to raise $15,000 for student scholarships, which would be divided into $500 gifts. The campaign ran Dec. 6-31, 2015, and included a series of online fundraising challenges: Dunker’s Challenge for students ($1,888), Faculty/Staff Challenge ($4,178), Alumni Challenge ($8,470) and Library/Athletics Challenge ($4,855). Each group was challenged to match the previous week’s gifts.

Racers jumped at the challenge, raising $19,391—nearly 30 percent more than the initial campaign goal! The fundraiser attracted 178 total donors; 87 of those were first-time supporters. The monies raised throughout the campaign will be used to create 39 new student scholarships and study spots in the library.

In addition to the funds raised, the university garnered significant promotional benefits from the campaign. During the campaign (December 7-31), the holidays.murraystate.edu website received 3,971 pageviews from 2,554 users. Interestingly, more users used mobile devices to access the holiday site (62 percent), compared to our typical mobile usage (38 percent) on the murraystate.edu site.

The total potential reach of the university and alumni Facebook/Twitter accounts was 3,040,582. The campaign generated incredible engagement, including 12,015 interactions. The holiday traditions video series were viewed 1,809 times, representing a 567 percent increase from the same time period the year before. Multiple news outlets covered the campaign.

By analyzing the data following the campaign, we determined that several small tweaks should be made during the next attempt: 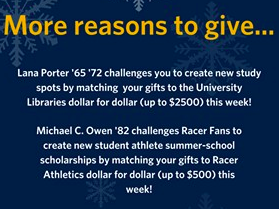 All in all, the campaign was a huge success. It proved to be a great learning experience for us as we begin contemplating how we might use a crowdfunding concept during a future campaign.

2 responses to “#RacerHolidays Celebrates Unity During an Online Crowdfunding Trial”