What do people gather around in social media? Real-time events. Whether it is homecoming, a concert, a football game, a conference or move-in day, social media gives people a chance to participate even when they are not there. Events build community simply because of the common thread of shared experience. A team of social media ambassadors can be the meat in the sandwich of fan engagement that gives people an inside look at what the event experience is like. Social media ambassadors use community to build community.

Building engagement and building community are two different concepts. Engagement has to do more with specific pieces of content, eyeballs, click-throughs and other actions that don’t necessarily relate to advocacy. Community is a longer term, organic group that relies on trust plus engagement. It’s important to note that trust is not a necessary ingredient for engagement.

This chart from Forrester Research shows which information sources people trust most. Notice that most of the top sources have to do with word-of-mouth or “neutral” sources like search engines and Yellow Pages. The sources in the lower part of the chart originate with the brand. It was a little disconcerting to see that “social networking site profiles from a company or brand” was next to last on the list. Many higher education brands are mistakenly relying on internally produced content to foster community. Real community begins with the community. 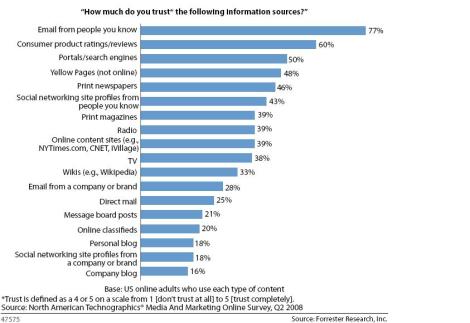 How To Choose Your Team Members

When Chris Yandle arrived at Georgia Tech as the new assistant athletic director of communications and PR, he had already collaborated on a successful social media ambassador program at the University of Miami. Yandle assessed the needs and culture at GT and blended it with best practices he already knew to form the #SocialSwarm team.

“When I came to Georgia Tech, I had been told that there was a disconnect between some faculty and athletics,” Yandle said. “I knew right away that I wanted to have a faculty member involved. I also wanted to have the guest tweeter from @GTStudents on the team, too, because that account has a large audience on campus.”

Yandle reached out to the university side of campus communications to fill the team.

“I solicited the help of our social media coordinator on the Institute side to help me recruit others. Out of the 10 users, we recruited five and the other five volunteered on their own.”

Yandle’s purpose in putting the team together was fueled by an understanding that community is best created by community.

“Similar to the @USocialSuite we created at Miami, our team is meant as the starting point for building an online community of fan ambassadors. We want our fans, students and alumni to know that we are listening, and many times, the best content created around games and events is fan-generated,” Yandle said.

“We knew we wanted more students at our games so we chose two student-athletes who would share the student experience at events,” Bruce said. “We also wanted to include our campus departments that share a stake in the success of athletics as well so we approached our university social media director and someone from the alumni office to be on the team.”

You’ve Got Your Team…Now What?

Both Yandle and Bruce agreed that giving the ambassadors a unique fan experience was pivotal to their buy-in. They also wanted the teams to show the variety of the fan experience and not just talk about the game.

“I had all the team members meet me outside the stadium following Yellow Jacket Alley (when the football team arrives at Bobby Dodd Stadium a couple of hours before the game). I gave everyone a #SocialSwarm shirt and a press box pass,” Yandle said. 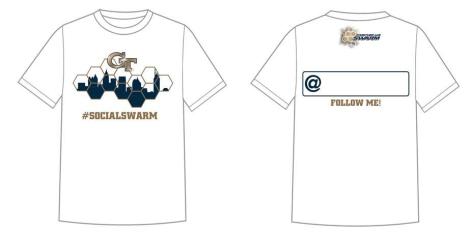 The #SocialSwarm also got a personal tour of the stadium and press box area that included an introduction to the radio crew. Team members were encouraged to take photos of the experience and post them on social media. They were also given the traditional media relations materials, including game notes and flip cards, and treated to a pregame meal in the media area.

As a lead-up to the launch of EWU’s social media ambassador team, Bruce sent out a press release and launched a concentrated social media campaign highlighting the personal Twitter usernames of all the ambassadors, encouraging fans to follow them during the season.

Bruce also supplied his team with T-shirts, a tour of the facilities and press box, and a special meeting with EWU alumni and ESPN radio personality Colin Cowherd, who happened to be in attendance for the game. 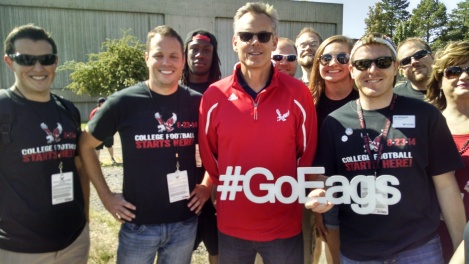 During a short orientation, Bruce supplied a list of opportunities that might highlight the fan experience and gave them sideline passes for the game. Social media ambassadors were asked to tag their posts with #goeags, which would ensure their posts would be shown on the video board during the game.

Yandle says the experience was a big selling point for the program.

“We made being a part of #SocialSwarm something special. Giving them a shirt to wear with the #SocialSwarm logo and chance for them to write their handles on the back was a hit with all of them. We promoted their handles all week and put up some social media slides pre-game for fans to follow them. Even before the game started, I had other fans ask me how to get involved. When that happens, you know you can have something special.”