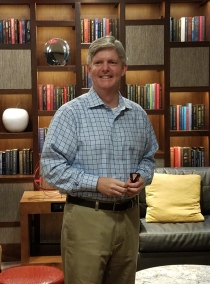 “If you have a good manager and a good team, they’re going to perform at a much higher level than if you have a team that is mismanaged,” says Herbert, senior vice president for university advancement at Miami University in Oxford, Ohio. As chair of CASE’s inaugural Management Institute, Herbert and his faculty members worked with cohorts of advancement professionals on leadership, managing conflict, collaboration and more.

Before landing at Miami University in 2012, Herbert was vice president for development at Dartmouth College and held roles at Indiana University, the University of Michigan and Drake University.

Here, the Texas native shares what he’s learned about management during his career (self-awareness and mentorship are key, he says) and why he’s committed to public higher education.

What’s the best part of your job?
I’m really, really passionate about public higher education. The role of public higher education is distinct and very important, all the way from access institutions to those that might be a little more prestigious. [Public institutions] open their doors to a broader population and that population is empowered to do vital things for our society. That’s important. Miami University helps me serve that mission.

What was your experience as chair of the CASE Management Institute?
Being chair has been fantastic. This is a lot of work. It’s not as if you come together, do a conference and you’re done. There’s a lot more direct engagement with participants and more work on an in-depth level—but it’s a lot more rewarding when it’s over. You know you’re adding value.

What were the high points of the conference for you?
The high point, outside of our cohort discussions, was having people complete the Hogan Development Survey [a leadership assessment tool]. [Participants] had a good indication of their strengths and weaknesses and styles. We got a lot of positive response from that.

The second piece that we really stressed was self-awareness: the ability to take a step back and think about how you’re communicating with your staff, how you’re being perceived with your staff and what they’re communicating back to you through their body language. Self-awareness undergirds all the teachable things we’re doing. How do you deal with a problem employee? If you’re self-aware, you deal with that in a different way than if you’re not self-aware.

You’ve said you’re passionate about good management. Why is it so important in advancement?
If you have a good manager and a good team, they’re going to perform at a much higher level than if you have a team that is mismanaged or has a lot of dysfunction.

Say you have someone who is really good at his or her job as a fundraiser, and that person gets promoted to the position of a manager. Managing fundraisers is very different from being a fundraiser. What you often see is, when someone moves into that management role without training, the people who are beneath them are unhappy because they are being mismanaged. The person given those management responsibilities is unhappy because they know things aren’t going that well and they miss being a fundraiser full time.

The conference aims to intercede in those moments and train people in a way that equips them for that job. That helps the people below them thrive because they will be well managed.