Sarah Sherwood heads the Office of Communications and External Relations for the Institute for Research in Biomedicine in Barcelona, Spain. The video project highlighted below is an example of how the communications office is raising awareness of the institute’s biomedical research to raise funding and recruit students and researchers worldwide.

Several months ago, I sat down with the head of an advertising agency in Barcelona to ask him how we could raise awareness and support for work that we do at the Institute for Research in Biomedicine—an organization founded less than ten years ago that is doing great work but is still relatively unknown.

“Everybody understands that biomedical research is a good thing,” he told me. “There’s no problem there. People just don’t have any ‘brand names’ to associate it with. That’s your challenge.”

After playing around with some ideas and browsing the Internet for inspiration, we decided to make an institutional video that would highlight our research and, importantly, our researchers—the hidden faces behind the science. We knew we wanted our video to be different, so we chose to dance.

We had three objectives in mind:

After several months of preparation—pulling together a team of professional producers, directors and choreographers to help us, and contacting sponsors to fund the production costs of the video so that we wouldn’t touch money that would be going to research—we brought more than a hundred scientists together for rehearsals and got the cameras rolling.

In the meantime, we started preparing a new fundraising framework for the institute in the hope that some viewers would be motivated by our theatrics to send in contributions in support of its research, either by text message or via our website. We also contacted major sponsors and convinced them to pledge small gifts for each view of the video. 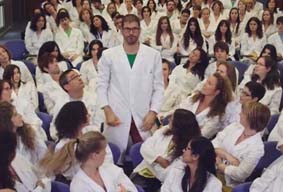 Less than a month later, the video has received more than 850,000 views from 197 countries, and it’s generated thousands of tweets, retweets and Facebook posts. Our Facebook reach increased by 15,000 percent, and our website hits increased by 9,000 percent. The video received extensive coverage by media nationally and in several other countries, and it even made the homepage of Science magazine. In addition, we received countless messages of support from scientists, students and people on the street, many of them with loved ones affected by the diseases that the institute studies.

Have we achieved our goals of awareness, recruitment and fundraising? It’s still early to say, but there are now more than 850,000 people who are aware that IRB Barcelona exists and know that we do important research into diseases. Time will tell if the attention translates into an increase in applications for our research positions and fellowships. Donations are arriving every day, and several individuals have even been in touch to ask how they can set up their own fundraising activities to support us.

Have we become a brand? That’s more difficult to say. If we can manage to build on this first foray into the public conscience and establish a long-lasting and meaningful relationship with our new-found supporters, then hopefully, we’ve made a (dance) step in the right direction.