More and more colleges, universities and independent schools have turned to compact campaigns to be agile and fundraise strategically. Waiting for the right time, right event or right collateral will delay the inevitable: the actual work of asking for money.

At The Cambridge School of Weston in Massachusetts, we needed to build a health and fitness center. Our campaign committee wanted to scour yearbooks for names of former student-athletes. But given our need for speed, building a new solicitation list was not strategic.

Instead, we told our most loyal, generous donors about our aspirations. By having those conversations we uncovered many people who identified with our project. We invited 150 people to a series of intimate receptions at the head of school’s home. One-third of them made gifts of $20,000 or more—helping us raise $9.1 million in about 18 months.

Eliminate the large committee. Limit your campaign committee to a small group of solicitors. For the fitness center appeal, we created a task force of proven volunteers—members of the parents annual fund solicitation committee. These volunteers divided up the donor list and made calls without delay, inviting people to coffee and asking them to support the fitness center. The chair conducted weekly email check-ins to evaluate progress. If someone wasn’t making headway with a prospective donor, we reassigned the prospect to another parent with whom they had a better relationship.

Skip that big event. When was the last time you attended a gala that prompted you to make a $50,000 gift? Exactly. Events don’t raise money; people do. Campaign kickoff events require time-time that you probably don’t have. Just secure meetings with donors and ask for the gift.

Use what’s at hand. In 2013, Massachusetts’ Noble and Greenough School launched its “Be Nobles Bold” campaign, a three-phase appeal to, among other goals, raise funds for building restorations. The campaign brochure mailed to every family got parents’ attention for the wrong reasons: Some said the piece felt too fancy and that money would have been better spent on core school activities.

Given this reaction, gift officers were reticent to bring the brochure to donor meetings. Instead, they used personalized 10-slide PowerPoint presentations that simplified the case for support. They left donors with a one-page overview of the campaign, with bullet points on school needs, campaign goals and timing.

Materials produced in-house can be tailored to a donor’s interests—making the meeting more meaningful, says Casey Hassenstein, a former senior major gifts officer at Noble and Greenough who is now director of major gifts and development communications at Dexter Southfield School in Massachusetts. Donors enjoy giving early feedback on campaign strategy. Less polished materials demonstrate that the campaign strategy has not been set in stone and that donor input is valued. Plus, you can save big on printing and design.

Rebecca Schultzberg, formerly the director of development at The Cambridge School of Weston, is now senior major gifts officer at Dexter Southfield School.

This piece originally appeared in the September/October issue 2017 of Currents. 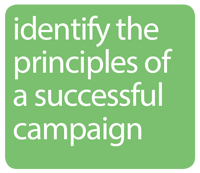