Ariel Jona is an advocacy intern at CASE.

These were a few of the questions discussed by a panel of nonprofit leaders at a June 28, 2017, Capitol Hill briefing on the impact of tax reform on charitable giving. CASE co-hosted the packed briefing, which was organized by the Council on Foundations and Independent Sector.

The impetus for the briefing was the recent release of Tax Policy and Charitable Giving, a study commissioned by Independent Sector and conducted by the Lilly Family School of Philanthropy at Indiana University. The study found that current tax reform proposals would significantly decrease charitable giving “by as much as $13.1 billion.” The study also indicated that expanding the charitable deduction increases charitable giving and that tax incentives affect giving to religious organizations as well as other charities. 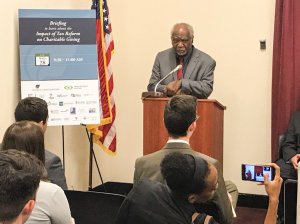 Rep. Danny Davis (D-IL) speaks during the June 28, 2017, briefing on the charitable giving deduction. Photo courtesy of the Council on Foundations.

Representative Danny Davis (D-IL) opened the briefing by voicing his support for charitable giving. Rep. Davis, a member of the House Ways and Means Committee and the House Philanthropy Caucus, spoke about how communities are positively affected by charitable giving.

During the briefing, panelists John Ashmen and Heather Noonan discussed their views on how various tax reform proposals would affect giving:

As the tax reform debate ramps up on Capitol Hill, CASE will continue to urge lawmakers to preserve and protect the full scope and value of the charitable deduction by enacting a universal charitable deduction. CASE members can receive more frequent updates on tax reform and other legislative issues affecting advancement by joining the CASE Advocacy Network.