Community college alumni relations programs appear to be gaining momentum, based on the findings of a new CASE survey.

Of the 139 institutions that responded, 47 percent have increased staff time spent on alumni relations in the last three years, and 50 percent said overall engagement by alumni has increased during the same period.

Total giving from alumni increased at 52 percent of the participating institutions in the last three years, according to the survey, whose results were released at the 2015 Conference for Community College Advancement in Anaheim, California, and will be presented again  during a free online presentation on Tuesday. Dec. 1.

Among the survey’s findings:

The ability for community colleges to grow their alumni relations programs will continue to be limited by the amount of staff and time devoted to this important area of advancement.

Findings indicate that community colleges are moving away from charging dues for alumni association membership. In 2012, 72 percent of respondents did not charge dues. That number increased to 81 percent in the most recent survey. 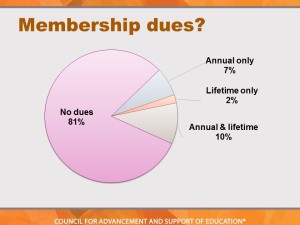 The majority of respondents do not charge alumni association dues.

For those who do charge membership dues, here are the amounts.

While these numbers overall remain relatively small, it is encouraging to see this kind of growth. It is clear that community colleges are becoming more sophisticated and intentional in their approach to alumni relations.

The survey covered a number of topics including dues, board size and communication and engagement practices. A CASE white paper with details will be released in early 2016.

Delve into the details and discuss them at an  online presentation at 1 p.m. (Eastern) on Tuesday, Dec. 1. The presentation is free, but registration is required.