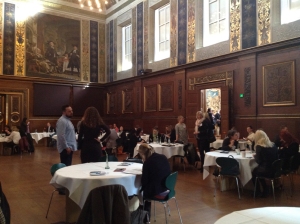 Delegates gather at the ceremonial hall at the University of Copenhagen

Last week, I spent 24 hours in Denmark for the launch of CASE Europe’s Nordic Summit, hosted by the University of Copenhagen. More than 100 delegates working in alumni and fundraising relations gathered to discuss advancement from five Nordic countries—Denmark, Finland, Iceland, Norway and Sweden—with others from Latvia, Netherlands, Switzerland, the United Kingdom and the United States.

Standing in the university’s stunning fifteenth century ceremonial hall, the opening speakers and later conversations with delegates gave me pause for thought. Speakers addressed the growth of advancement in Nordic countries and how institutions have adapted practices from non-Nordic countries to their own culture and institutions. One delegate remarked that this event was not, as I had thought, the first time that CASE Europe had held a conference in Scandinavia. In 1994, a similar, but smaller, gathering met at Chalmers University in Sweden. So, why the long gap?

In the intervening 20 years, CASE Europe has seen a growing number of advancement professionals across the Nordic region attend our programmes in the U.K. We have admired some impressive activity—including recent public fundraising campaigns at the Karolinska Institute,  a matching gifts programme in Finland and wide engagement with corporations across the region. Alumni engagement, with the goal of supporting an increasing number of university priorities—including careers support for graduates, international student recruitment, and of course fundraising— is growing as a mainstream activity.

Indeed Lykke Friis, pro rector at the University of Copenhagen, welcomed CASE delegates sharing her institution’s recent history in this area. The institution started an alumni programme in 2007 and the university attracted an initial 600 alumni to its alumni association, using the slogan “become a student for life.”  She quickly added that this motto was counter to the general move in Denmark to accelerate degree completion. Today, the University of Copenhagen has more than 25,000 contactable alumni and the focus is on mutually beneficial relationships, long-term investments in each other and alumni career mentoring. projects . The pro rector talked of looking at how advancement is approached in U.S. and U.K. universities, but said that Copenhagen had to find its own way of doing things, adapting best practices to its culture.

The Nordic Summit’s opening speaker was John Hill, higher education evangelist for LinkedIn. Reflecting on John’s job title, I wondered if the work of CASE Europe is educational advancement evangelism. There is some truth in this as advocacy forms an important part of CASE Europe’s remit. However, as a volunteer-driven organisation, we are not imperialists; we are driven from what’s happening on the ground. CASE Europe’s 2014 Nordic summit, 20 years after its predecessor, happened because practitioners, led by Corey Morris,  alumni relations manager for the school of business, social sciences at Aarhus University, made it happen. No amount of evangelism can take away from “the time is right” to do something. And so, 20 years later, the time is very much right for the Nordic advancement profession and the institutions they serve. Tak (thank you) Copenhagen…next year Helsinki, Stockholm?