Jen Doak (@jpdoak) is the online communications specialist at CASE.

It started with Facebook. In 2004, alumni associations and foundations found themselves, perhaps for the first time, facing some existential questions. If all of a sudden alumni could use social networks to keep in touch with each other, then why would they join associations to do the same thing? What value was the relationship providing them?

These are questions institutions are still struggling with, but at the recent Annual Conference for Corporate and Foundation Relations Officers, held June 4-6 in San Francisco, I attended a session that explored a possible solution: strategic institutional crowdfunding.

Michael Greenberg, co-founder and CEO of ScaleFunder, and Daniel Scarpelli, senior director of annual and special giving at the University of California-San Francisco, gave a few crowdfunding examples and shared their thoughts on why some succeeded and others didn’t.

Crowdfunding isn’t a new idea—it’s not much different from bake sales, lemonade stands or, for that matter, the annual fund, said Greenberg. But coupled with social media, it can become a powerful way to connect people with their passions. “[Your institution] means 100 different things to 100 different people,” said Greenberg.

But before you run out and start a campaign on Indiegogo, you need to—say it with me—have goals in mind. Scarpelli outlined UCSF’s goals for its pilot crowdfunding program: 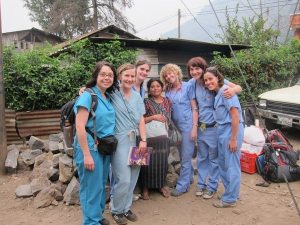 From the “Midwives for Comadronas” campaign page. Credit: UCSF.

UCSF’s Midwives for Comadronas program is a service learning program for nurse-midwives in Guatemala. The program managers came to Scarpelli’s team with the goal of raising $1,000 a day to support a biomedical research internship. And they succeeded: The total raised was $23,890, with an average online contribution of $84 from 165 unique contributors.

The campaign even uncovered an alumna who had been unhappy with the institution, but ended up not only contributing funds but accompanying the group on their trip to Guatemala.

The Veteran’s Health Campaign was designed to raise money in partnership with a local medical center for a treatment to help veterans with post-traumatic stress disorder. “We had a beautifully created campaign with a video,” said Scarpelli—his team figured that raising money for veterans would be easy.

But only $5,316 was raised, $5,000 of which came from an offline donor, and the rest from 11 unique contributors. What happened? “It was a compelling, timely topic that was institutionally led, [but] there was no urgency,” said Scarpelli. “The campaign was to supplement a much larger need.”

Scarpelli and Greenberg said that fundraisers need to ask themselves the following questions before delving into crowdfunding:

A Quick Note on Perks

“From a philanthropic perspective, we have to be careful with the types of perks we’re able to offer,” said Scarpelli. But offering experiential perks can be successful. “If it’s a cool science project, let them turn on a laser or send them a digital image from a telescope,” he said. One UCSF project offers thank-you notes from students, project T-shirts, a video message of thanks, autographed beakers and even lunch with a scientist.

Check out an article in the May/June 2013 issue of CURRENTS, “Crowd Around,” which gives examples of other institutional crowdfunding initiatives as well as a perspective on how the trend is changing the future of fundraising (log-in required).