Pamela Agar is the Head of Digital Media at Imperial College London in the UK.

Several of my colleagues at other universities raised an eyebrow when I suggested that we would be placing a live twitter feed on our institutional homepage for a day. What if people abused the opportunity to get rude content published? Or an over enthusiastic tweeter took over? What if no-one tweeted at all?!

June 13 – 17 marked Universities Week 2011 in the UK—a national campaign demonstrating the benefits of universities within UK society. To close the week, the campaign aimed to bust some of the myths about 21st century campus life by inviting institutions and their supporters to contribute to a 24-hour twitter stream sharing what they were doing—using the hashtag #uniweek.

We’d been keen to try something more interactive on our homepage and are lucky to enjoy lively and popular engagement on Twitter, so we jumped at the chance to participate.

I spoke to J-P Jones, our press and communications officer who coordinated the day at Imperial, about how he planned it:

Why did you decide to take part?

We thought the “day in the life” Twitter idea was a good way of building a greater sense of community among Imperial’s regular tweeters and connect with new ones. In addition to providing insight into College life it allowed us to better understand who the other Imperial tweeters are.

Why did we run a second hashtag?

We used #ImpCol in addition to #uniweek to clearly identify the tweets from our own staff, students and alumni, so that these could be pulled into the live stream on the College homepage.

Why the College homepage?

We felt it was important that the entire Imperial community could participate and read the content being generated, rather than just those already engaged with Twitter.

Were you worried that placing the feed on the homepage was too risky?

It was a risk, but preserving the authenticity of a live feed was key to the spirit of the exercise, so our digital team created a homepage design which regularly refreshed to show the most recent #ImpCol tweets, whether they were positive or not. The only moderation was a limited filter for offensive language. Communications staff monitored the feed throughout the day though, and we had a backup plan in place in case it was hijacked—which was to change the homepage to show @imperialcollege tweets only. 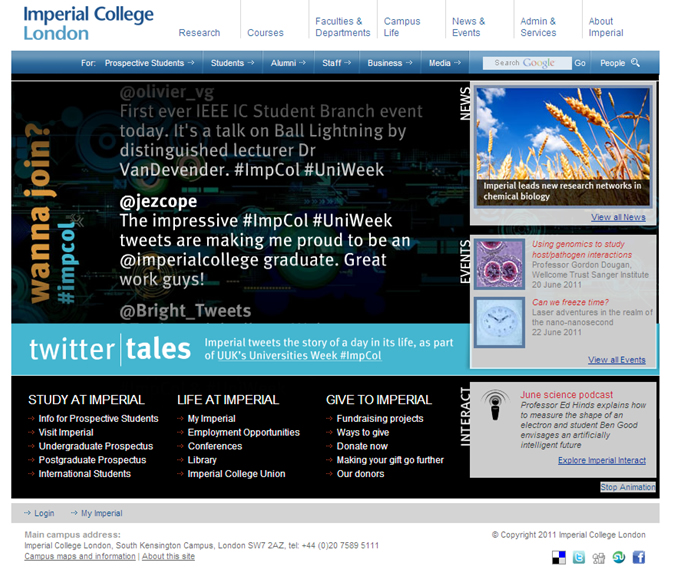 How did you engage with the college community to encourage participation?

We created a webpage in advance of Twitter day, outlining our aims and the kind of content we were looking for and promoted that page though ads in College publications and mailing lists. We also pulled together a list of all the tweeters we knew well and informed them, as well as approaching alumni. And, of course, we tweeted!

What did people talk about?

We had a great mix of staff, students and alumni getting involved. People were talking about what they had to do that day—whether it was lab research, lecturing abroad, revision for finals or staying in bed!

What were your favourite contributions on the day?

Two in particular stood out for me:

@limeytweet Half listening to a chap on train (#impcol PhD student) educate communters on physics thesis work. To his credit, they’re totally into it!

@mattallinson: I’ve been working for 6 months in a lab and not once have I accidently turned myself into a superhero #impcol #uniweek

Was it worth it and will you try it again?

Definitely, though we heard that productivity across the College was probably a little lower that day as staff became engrossed in the feed! It was particularly satisfying to see people who never normally use Twitter getting involved via the homepage. We had over 600 tweets using our hashtag and even trended on Twitter in London at one point during the day.

We would really like to try something similar again, perhaps around Welcome Week at the start of the next academic year to engage new students.

Read the full archive of #impcol tweets from Universities Week 2011