Ma’ayan Plaut is the social media coordinator at Oberlin College.

Mission: In four days or 84 hours, try to connect as many people as possible.

Campus: Oberlin is usually a campus of 2,800 students during the school year; during commencement/reunion weekend there are over 600 graduating seniors, around 2,000 visitors (in the form of family, friends, and alumni) returning, and several hundred students working for the entire week/weekend.

Commencement week is a wonderful time at Oberlin. A confluence of generations, happiness and sadness, families, friends and a conglomeration of amazing events culminates in the degree ceremony on Monday morning. The weekend is full of Oberlin’s finest: onstage in the form of recitals, plays and musicals; panels of alumni experts; historical walking tours; and graduation parties, dinners and senior sendoff events.

A team of photographers, writers and communications staff covered events in shifts throughout commencement weekend on May 27-30. The booklet of weekend events numbered 50 front-and-back pages and that was only the publicized events. As a former commencement photographer and now social media coordinator, my role was to be present in as many places as possible over the four-day period.

Photography is my dominant passion and my go-to approach to connecting people around the world and generations of Oberlin alumni to each other. For our weekend, which is a mashup of a handful of reunions and the festivities revolving around the commencement exercises, I decided to do photo updates through Facebook and Twitter.

We kicked off our weekend with the debut of our Friday parody video at the senior supper on Thursday evening and then on YouTube a few hours later. Our seniors and alumni (returning or otherwise) were completely pumped for the whole weekend, with their eyes on us. The video worked well and got the buzz surrounding Oberlin commencement going so that our audience was on the lookout for updates throughout the weekend.

To pull all this off, I focused on the following: 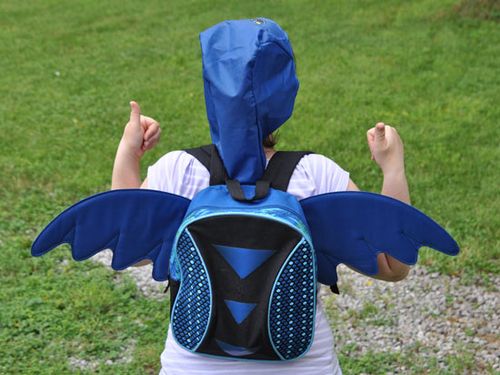 I decided to scrap the wings and hood for fast traveling between events. I also didn’t want to be a conversation starter at every location I visited (not conducive to the shoot-and-dash nature of my weekend). Photos by Brandi Ferrebee.

These baskets came in handy over the weekend.

Overall, the weekend was a wild success. Our Twitter account, @oberlincollege, only recently reclaimed from a defunct account, gained many new followers and valuable endorsements from influential alumni over commencement weekend. I realized that there are far more alumni on Twitter than we had previously thought. Next year, we’ll create a dedicated hashtag for the weekend rather than just the #oberlin tag we used this year.

In the future, it would be valuable to recruit volunteers to help get information out via social media. A member of the alumni association was updating to Twitter and Tumblr a few times a day, with a bit more content than just captions, which I was able easily retweet and reblog to give a grander perspective. If even more people were doing this, it would have been stunning. There’s always next year.

What did you do for commencement at your institution? What lessons did you learn about what worked and what didn’t?