Move-in day is an exciting time for any institution. Freshmen and upperclassmen alike look forward to the start of a new school year, and even faculty and staff are ready to get back in the swing of things after the summer.

At Wake Forest University, freshmen arrive early and go through five days of orientation programming prior to the start of classes. Move-in day is a special time to celebrate the freshmen and make them feel a part of the campus community. From print media (Wake Forest mailed an actual book about being a freshmen to the class of 2017) to orientation programming, there are a number of ways Wake welcomes new students to “the Forest.” Social media is also an important part of these efforts.

In general, I think in three parts when it comes to planning the social media strategy for any major campus event:

Engagement
To accomplish these goals, I focused on the following efforts:

The Hashtag
As with any event, the hashtag for move-in day is incredibly important. Last year, #wfumovein was the official hashtag. This year the hashtag is #wfu17. The members of the Class of 2017 were active online for several months prior to move-in using #wfu17. They talk to each other without any prompting, discussing everything from class schedules to roommate assignments to packing to their feelings about leaving home. And they are also tweeting and posting to Instagram using #wfu17. (In fact, there were already 302 Instagrams tagged with #wfu17 as of Aug. 20, two days before move-in.) It’s great—@WakeForest1834 has been having so much fun engaging with these students.

So back to the hashtag choice. These students are the Class of 2017, and I saw no reason to try to drive adoption of a different hashtag, especially since #wfu17 makes sense. Whether or not you’re a member of the Class of 2017, you can still use the hashtag on move-in day. Finally, the social media event displays around campus are a big part of both promoting the hashtag and incentivizing user-generated content. Using #wfu17 allows me to pre-populate those displays with great content before they go live.

The campus hashtag has been promoted both online and around campus. Online, we announced that it was the official hashtag. We also have downloadable Facebook covers, Twitter headers and Twitter backgrounds promoting #wfu17. They were released via social media three days before move-in day. @WakeForest1834 also had a special Twitter background: 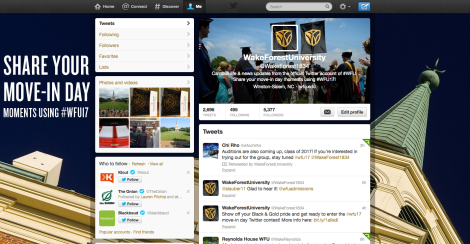 On move-in day, flyers promoting the hashtag were posted at campus locations where freshmen have to make stops. 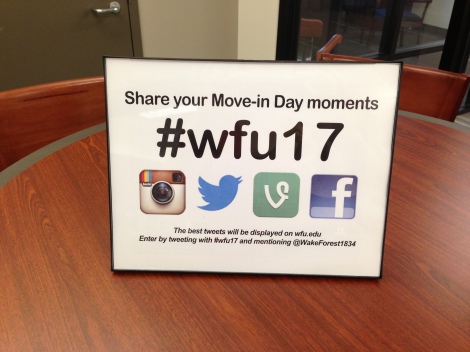 The hashtag was also integrated into the social media event display.

It was also promoted as a part of the “homepage takeover” that our web team put together for move-in day. (It was live Wednesday, Aug. 21 through Monday, Aug. 26.) 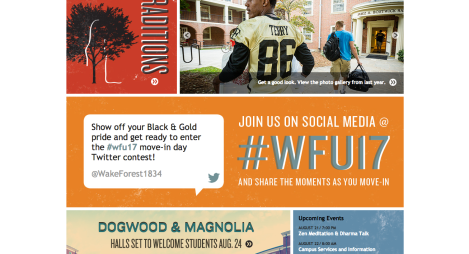 Social Media Event Displays
I’m most excited about the #wfu17 social media event displays. They support all of the day’s goals, from welcoming students to incentivizing user-generated content.

Wake Forest does not have a central digital signage system. I spent the majority of my time leading up to the event coordinating with various managers of screen real estate in buildings that freshmen visit on move-in day. Some of these locations include the student center, the library, a popular dining location, laptop distribution center and the alumni parent reception. I’m thrilled that most were more than willing to partner with me and show the #wfu17 display. (And the next time there’s a major campus event, it won’t be as time-consuming to coordinate because I have a contact list.)

There are a variety of social media event display tools to choose from. I researched a number of them before deciding to use Tagboard. Tagboard met my basic requirements: budget-friendly, easy-to-use, live-updating, integrates multiple social networks and (the most important) it provides content moderation.

The social media event display was shown on a variety of screens, from digital televisions to projectors. It was also available via a campus cable channel which gave us access to additional TV screens that we wouldn’t have been able to use otherwise. The Tagboard was also on the web at tagboard.com/wfu17. The live mode was enabled on screens around campus so that content would update in real-time. The web version requires the user to refresh the page manually.

Twitter Contest
The #wfu17 Twitter contest was another engagement activity. It was open to the entire Wake Forest community and easy to enter. To enter, participants submitted a move-in day related tweet with the hashtag #wfu17 and mentioned @WakeForest1834 on Aug. 22. A winning tweet was selected every so often depending on the number and quality of submissions. When a new winning tweet was added to the homepage, I took a screenshot of it and @WakeForest1834 congratulated the winner on Twitter.

The contest was announced Monday, Aug. 19, and was promoted on social media and in our print flyers.

Measures of Success
I decided to use a combination of measurements to track results and determine success. (I will write a follow-up post with the results.)

Regardless of your role on campus, move-in day is a whirlwind. If you’re a community manager, lead with a defined strategy and plan for engaging the campus community online. Then watch as students express themselves. After all, they’re about to begin the best four years of their lives. And that’s definitely something worth talking about.